It’s important to remember that GADS doesn’t sync changes live, so if you add a new user to your AD domain you either have to run GADS manually or wait until the tool runs on a schedule.

All syncing is one-way (AD > Google Apps), so changes made in the Google Apps domain control panel are not transferred back to Active Directory. Because of this, in some instances changing account information in Google Apps can cause Google accounts to become disassociated with AD accounts, or at worse deleted when GADS syncs. Be careful!

Once you’ve perfected your GADS configuration you can schedule regular synchronisations to update Google Apps with any changes made in Active Directory.

In this example I am assuming you are using Google Apps Directory Sync version 3.1.3 to synchronise a Microsoft Active Directory environment.

One of the main issues I came across when using GADS is that documentation, even from Google, is patchy, and the terminology can be confusing as Google and Microsoft use different terms for similar features. What I wanted was a detailed overview of each of the options in GADS. This is what this is!

Now to GADS itself. Download and install Google Apps Directory Sync. You can install it on any Windows or Linux machine. I’m using Windows, but the instructions are the very similar for Linux.

Installation is simple, and once installed you can access the software from the Windows Start Menu — you want the Configuration Manager application. If you’re on Windows Server 2012?

The first thing you will see is the General Settings tab. From here you can select which portions of your Active Directory are synchronised to Google. 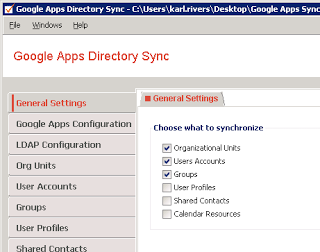 Tip: AD Organisational Units are referred to as “Suborganisations” in Google Apps.

You don’t have to transfer your OUs one-to-one either, you can choose which OUs to sync, and even transfer one OU to a differently named Google Apps Suborganisation.

Which AD users GADS should sync?

It’s important to remember that GADS does not synchronise passwords, it doesn’t even transfer them across at all. So, even if you’ve successfully synchronised all of your AD accounts, your users won’t be able to login to them. This is because passwords in AD are stored outside of the LDAP AD user object in a place GADs is unable to access. To synchronise passwords you require Google Apps Password Sync (GAPS) — I’ll be posting an article on GAPS later.

Groups refers to your Active Directory groups. Group sync allows you to pass over objects such as mailing list groups from AD.

GADS also allows you to synchronise the following:

Karl Rivers is a Director of IT who has worked in education for more than twenty years. He won the Naace Impact Award for Supporting School Services.